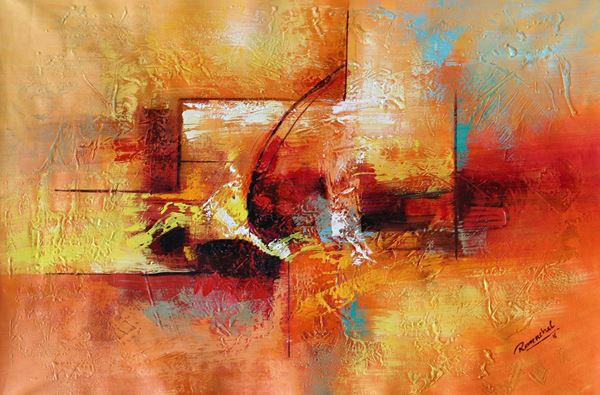 Patterns and Understanding of Abstract Art

Origins of the Art: Abstract Art is one of the oldest forms of art known to mankind. Rather Art came to in to being in abstract form from the following two well-known cave paintings

These have been estimated to be engraved in about 40000 BC and are considered one of the earliest edicts of abstract art. Further evolution of abstract art has been recorded in 19th century when ‘impressionism’ sparked off creativity and heralded a paradigm change in the art of painting called abstract art. ‘Non-objective art’, ‘non-figurative art, ‘non-representational art’ are certain other names for abstract paintings. True to the Art , when artists are at work imagination and ideas seek new frontiers and so emerged in the next 100 years several new patterns as also ‘isms’ to tag each new pattern and version of abstract art. Why abstract Art To appreciate those patterns, it is relevant to understand the philosophy of abstract art as recorded by connoisseurs of art. It is said that all art is abstract and there is no possible demarcation of where realism ends and abstraction starts. Even in a conventional painting, the object created is a summation of what the artist thinks he or she has seen. So there is a degree of abstraction ‘assumed’ in every painting. The ‘abstract’ school, so to say, opined that in visual art the spectator should not be bound by the imagination of the artist. So in abstract painting, the colour and form takes more importance than the object or scene depicted. The objective is that painting should not be analysed by the brain but should reach the emotions, similar to music. The spectator should have the ‘luxury’ of interpreting the art as per his/her imagination. An abstract expressionist best appeals to the feelings rather than impress intellectually. Following painting illustrates the ‘distance’ from conventional to abstract art. Patterns in Abstract Art Critiques have classified paintings as per degree of abstraction and type of abstraction which has enabled the tagging of various versions. A brief reference is attempted below to a few patterns recorded in commentaries: There are two primary classifications – paintings ‘abstracted’ like natural scenes. The portrayal will resemble a scene or one can get an idea as to what the painting is about. Following work by Claude Monet is one such example: Second broad category is ‘pure’ abstract art in which the painting is all about lines, shapes, colors and so on. The objects and characters in the depiction need to be interpreted to enable understanding and appreciation. Work of Joan Miro pasted below Peinture (1930) by Joan Miro – (Spain) A few patterns which may be classified under pure abstract art are Pointillism, Fauvism, Cubism, Tubism, Action painting Pointillism George Seurat (French painter) created forms and shapes by plotting small dots adjacent to each other on the canvas. Colors enhance the objects and make the painting intelligible. Wassily Kandinsky (German painter) demonstrated the impact of shapes, lines and more importantly colors on the emotions of a person. He argued that work of art should appeal to the mind than brain. He cautioned artists not to indulge in mere decoration of a portrayal to create impact. Cubism In this pattern the artist creates different impressions of the same object on one canvas. Each impression will be different view of the same object such that the final canvas will look like separate photos taken from different angles pasted on one flat sheet. The artist does not make the effort of creating a 3D image effect to the painting. Tubism or Futurism Fernand Leger painted this pattern wherein he created cylindrical or spherical shapes to represent characters and objects. Action painting Commentaries discovered that while artists are always influenced by contemporary and dominant cultures of their time, certain artists decided to rebel against the ‘acceptable’ and create new art of their own. Action panting is one such pattern by Jackson Pollock of US in 1950s. These expressionists chose to concentrate on the physical properties of the paint to create form, colour and texture on the canvas. Conclusion Any work of Art has to be observed or felt and Abstract Art is no exception. To understand and appreciate abstract art, one needs to know about the artist his/her culture and also the context that created the painting. Array of shapes and lines will be confusing unless one observes the work with an open mind tempered with sufficient knowledge about the artist.