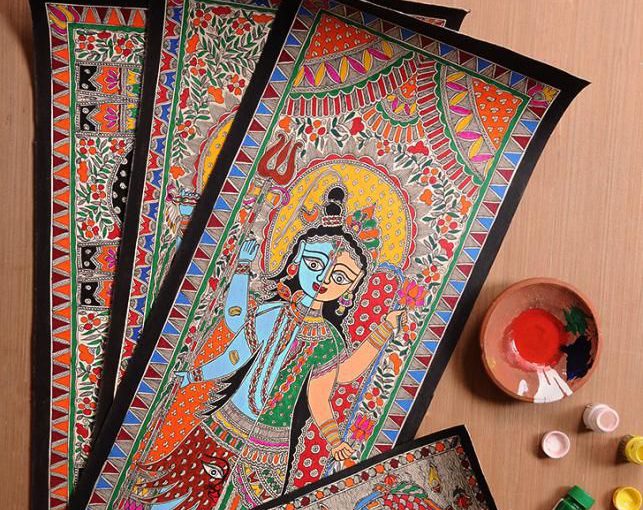 Madhubani paintings, as a separate school of art, claim origin from Ramayana days. King Janaka of Mithila desired that the kingdom should celebrate his daughter Goddess Sita’s wedding with colorful paintings. The womenfolk of the land created the art which came to be called Mithila paintings.

Because of the origin this category of art has been historically associated with functions and festivals. The paintings depict the mood and mythology of religious rituals and festival occasions. Main themes also include caricatures of Hindu Gods, Goddesses and mythological stories. Most of the exponents of Madhubani paintings are from the erstwhile Mithila region of Bihar. Several of the available write-ups state that leading exponents of Madhubani paintings were women and the tradition continues in the current age also. The paintings are predominantly made using powdered rice and colors are derived from turmeric, various flowers, sandalwood, and leaves of various plants and trees. Also brush is not used but created with twigs, matchsticks and fingers. One can relate the fact that womenfolk excel in this school of painting to the medium deployed to depict the art which are also nature based. ‘Rangoli’, one form of pattern drawing practised in southern states of India, is essentially created using powdered rice and again entirely womenfolk take to this art. In olden days the paintings were created on walls of houses for weddings and festival occasions. Over the years the painting is created also on paper, cloth and canvas. One distinctive feature of the work is the complex ornamental patterns created to represent people and ideas in the work. Nature and animal life form an integral part of the theme depicted. The pattern forming creatives are noticed in contemporary versions of the paintings as much as in the work published a few decades ago. This school of art used to have five different styles such as Tantrik, Kobhar, Bharni, Godna and Katchni in the early part of 20th century .The upper castes adopted the style of Bharni, Katchni and Tantrik. Since the women of these communities were confined to household duties, their paintings depicted rituals and spiritual themes. The other two styles of Godna and Katchni were followed by women from other castes that used the art medium to depict life in the village and their hopes and aspirations. However, it has been recorded by connoisseurs that during the last few decades the five different styles have substantially merged to a common style and the caste distinctions have vanished. The paintings have increasingly become a medium for women depict issues relevant to society in present day life moving away from themes of festivals and spirituality.